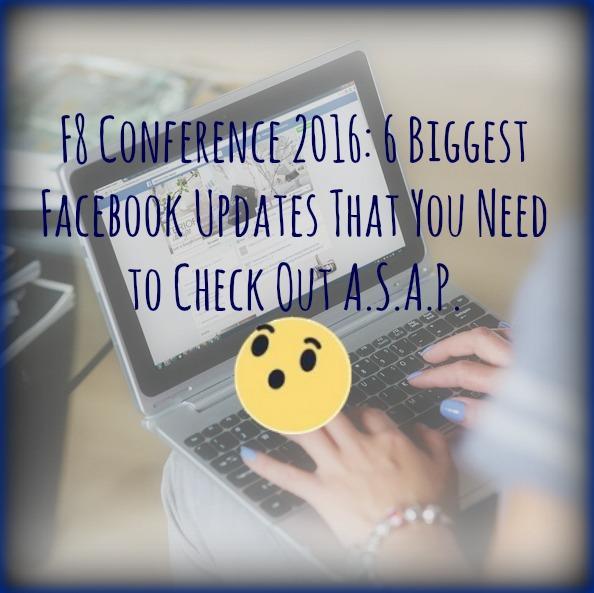 F8 Conference 2016: 6 Biggest Facebook Updates That You Need to Check Out A.S.A.P.

It’s that time of the year again–the time when Mr. Zuckerberg decides to tweak things a little bit and add a twist of creativity and madness to the Facebook features that social media marketing experts were used to. The consequences? Well, as always, the day after is similar to the day after a night of partying; some will take it better than others and celebrate the news, and others, well, let’s say they can be experiencing a little bit of a headache.

On April 12 & 13, 2016, the F8 Conference was held. Even though these conferences are normally aimed to developers, the reality is that the decisions announced there will end up affecting all of us sooner or later.  So, we were listening very closely because these are things we need to know as Orlando social media marketing experts. And since we didn’t want you to miss any important details, here are the six top things that were announced yesterday that you need to save for later (no need to be on Facebook now, new feature), or read now. Let’s get started!

1.Your Profile Image Can Now Be a VIDEO

Yes, exactly like in Snapchat. Through the use of an app like Vine and other tools, users will be able to change their image to a video in seconds. But wait, don’t leave just yet. You are going to like the next update!

2. Save It For Later Wherever You Are

This is what we mentioned before. The “save for later” feature that Facebook has been offering for a couple of years now was so widely used that they decided to offer that option throughout the entire web. So, if you are reading this blog, you’ll have the option to save it for later on your Facebook account even if you are not reading this from Facebook. Pretty useful, right? This will allow Facebook to start understanding your content preferences and eventually show people the types of content that they are really interested in on their feeds. Good or maybe too much? Judge for yourself! Publishers can add the “Facebook Save” button to their websites today, and here’s how:

In order to avoid other users taking credit from other publishers, Facebook has launched Rights Manager to combat freebooting. By filling this application, the publishers of the video will now be able to monitor and protect their content by determining if others can use their clip or not. Once that’s set up, publishers will be able to see if someone else is using the video, how much of it was copied, the number of views it got, and where was it posted/uploaded. So, be careful with the clips you broadcast moving forward, as it could have consequences.

4. Ads On Your Private Messages

We didn’t want to start with this one because we know this update could eventually become a little tricky. Even though Facebook is still deciding on how to make this profitable, Bots For Messenger will get the conversation closer between users and brands, making it easier for users to start a “casual” chat with that particular brand. In return, users might get a little reminder a couple of days after a conversation as a remarketing strategy for brands.

Publishers can sign up at instantarticles.fb.com, and join the program today!

Facebook is launching quote sharing with Amazon, which built quote sharing into its Kindle e-reader. Now people will be able to highlight and share that piece of content, and it is as easy as it sounds!

Virtual reality (VR) was, of course, mentioned, as well as augmented reality (AR), but according to Facebook’s roadmap, these won’t come in play until 2026, so let’s just chill with our Oculus Rifts for a while. These realities, and other types of futuristic elements, are what will keep the Facebook geniuses’ minds occupied in the upcoming years. Would we be able to buy things from our favorite clothing shop from our sofa experiencing the same feeling as if we were shopping in the store? Who knows?

That’s all for now, folks! The conversation ended yesterday at the second roundup of the F8 Conference 2016, but the focus remained on artificial intelligence and AR / VR technology and global connectivity. For more social media updates from your favorite Orlando social media marketing team, and don’t forget to bookmark our blog!

Now, go and explore like a kid on Christmas Day. I know you can’t wait.