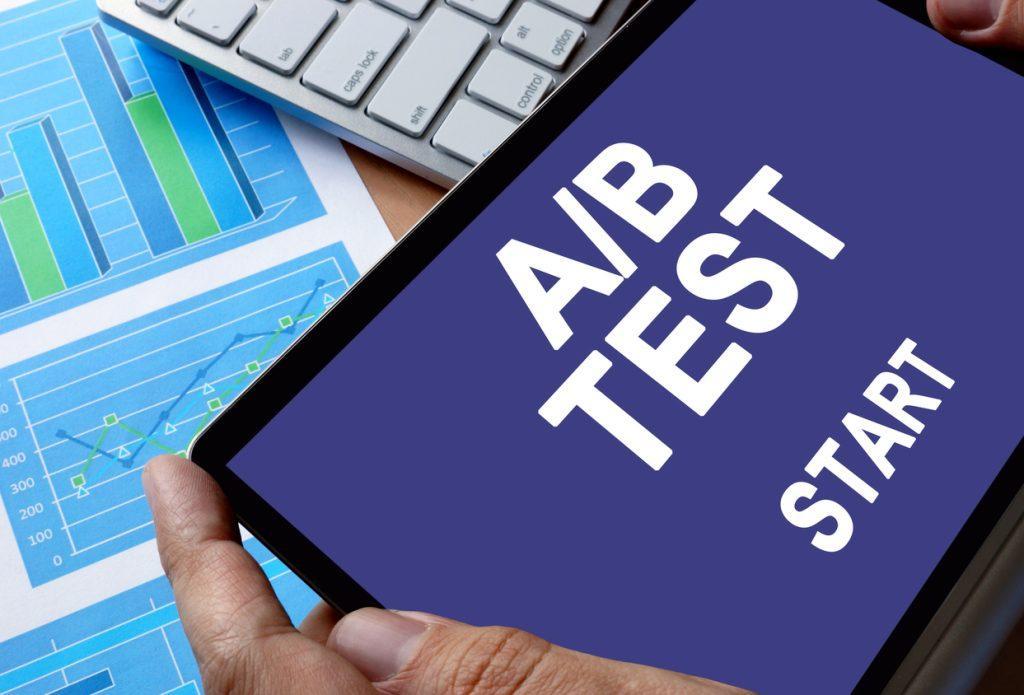 The ABC’s of A/B testing

What is A/B Testing?

A/B testing, also referred to as split or bucket testing, is a method employed in data-driven marketing that compares different versions of, well…just about about variable of your digital advertising. Headlines, website copy, images, calls to actions, colors, font size…you name it, it can be tested for performance. At its core, this method of digital marketing is an experiment in which your audience is randomly shown one of two or more variants of a page or ad. Then, using statistical analysis, you determine which version performs better.

A/B testing allows digital marketers an opportunity to ask focused questions about changes to websites, apps, and ads; then collect data regarding the impact of that change. By measuring the impact these changes have on your metrics, you can take the guesswork out of website optimization and ensure that every change has positive results.

While A/B testing can run the gamut from relatively simple to much more varied and complex, the basic formula remains pretty much the same:

Don’t be intimidated! We’ll walk you through each of the steps next.

Collecting data can be done on many different platforms and is typically done automatically (yay!). Depending on what you’re testing, you can use Google Analytics, Facebook Analytics, Google AdWords, or any other service that shows you web or ad statistics relevant to you. Once your data is collected, you can identify where your web page or ad is under-performing and set some goals. For example, you may notice that a Facebook ad has a below average click-through rate. Take a step back, look at your ad, and move on to step 3: generate a hypothesis.

Without taking you back to middle school science class, a hypothesis is a proposed explanation made on the basis of limited evidence as a starting point for further investigation. Read: starting point. The fun is just beginning! So back to our Facebook ad. Is the call to action too vague? Is the headline not attention-grabbing enough? Pick the element(s) you feel will have the greatest affect and, you guessed it, create the variations. If you’re having trouble deciding which variable to A/B test, AdEspresso has you covered. In a recent study, $3 million worth of Facebook ad experiments were tested and the campaign elements with the highest split testing ROI included: countries, precise interests, mobile OS, precise interests, genders, ad designs, titles, landing pages.

Facebook makes this part pretty simple for digital marketers by allowing them to experiment with multiple audiences and ad placements to optimally reach their target audience. So let’s take a look at how to conduct an A/B test using this medium.

In an A/B test, you take an ad then modify it to create a second (or multiple) version(s) of the same ad. Changes are typically limited to a single element, such as a headline, image, or color of text; but they can become as complex as a complete redesign. Just keep in mind that it’s called A/B testing for a reason: Because there’s usually a version A and version B. Simplicity not only helps you retain your sanity, it also facilitates quicker, more relevant results.

Then, the magic happens. Half of your traffic sees one version of the ad (known as the control) and half are shown the modified ad (the variation). Visitors engagement with each ad is measured, collected and analyzed in an analytics dashboard. Ultimately you can determine which changes had positive, negative, or no effects on visitor behavior.

A/B testing eliminates the hassle of trying to figure out what your audience wants and lets them speak for themselves. Rather than try to predict what design will reach your target demographic, you quickly test multiple ad versions and see which one is most effective.

Need help optimizing your Facebook ads or other digital ads? Our social media advertising team is poised and ready to help you achieve your goals. Give us a call today to learn more at 888-248-2134 or email us at info@greenarrowmm.com.