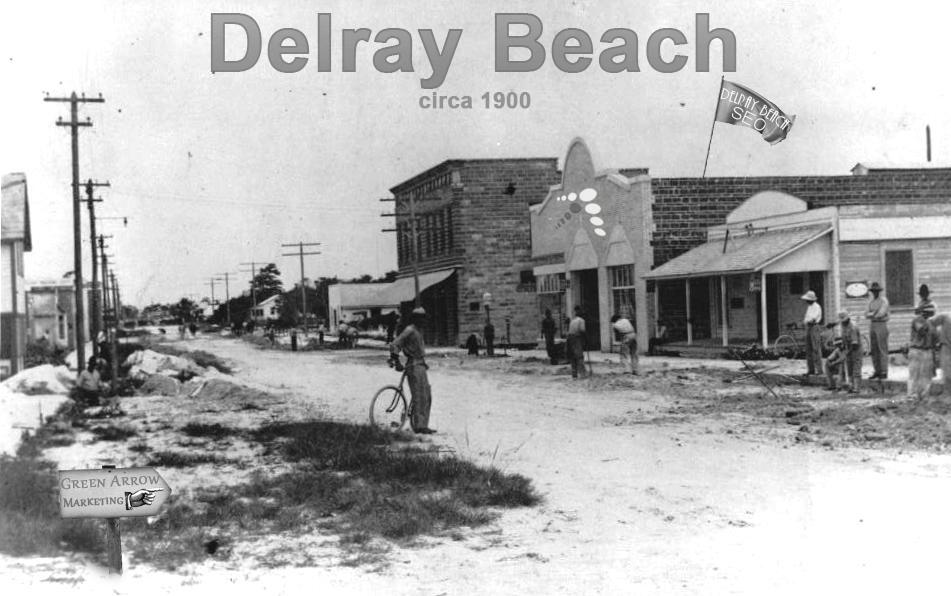 Delray Beach Florida is headquarters for Green Arrow Marketing, one of South Florida most respected & trusted marketing firms. Specializing in digital marketing, we’ve established a healthy clientele base by delivering high quality results. Our new clients come largely by way of referral, a testament to how hard we work to deliver those results. Being based in Delray Beach has many advantages, not the least of which is the beautiful weather!

With a population of almost 70,000 people, Delray Beach is widely know as ‘The Village by the Sea’ and  was the recipient of the All America City award, twice. With roots as diverse as the current culture, Delray Beach is a vibrant mix of folks from all walks of life. Earlier settlers date back as early as 1876, and were comprised of a mixture of settlers who moved south from the Panhandle, the Linton settlers & farmers, settlers from the Bahamas and Japanese settlers from the Yamato farming colonies.

In 1923, the area east of the Florida East Coast Canal, which later became the Intracoastal Waterway, was incorporated as Delray Beach. In 1927, Delray & Delray Beach merged to become known as Delray. Beginning in the early 1920’s, there was a growing group of artists that began to call Delray home. As time went on, the artist’s formed their own colony, which went on to become the Artists & Writers Colony. More & more writers, cartoonists and artists continued to flock to the area. Together, the artists regularly rubbed elbows with politicians and aristocrats over a pint. Because of the growing number of regulars to Delray, the price of property here continued to rise through the 40’s, largely protecting it from the effects of the economic downturn suffered by much of the rest of the country at the time.

Delray has a storied past throughout World War II. As a growing seaside colony, residents took to the beaches to patrol for the enemy. Ship attacks could be seen by patrolmen on beachside horseback, as well as from makeshift towers along the shoreline. As military personnel continued to serve locally, many found a long term home here. Drawn to the sandy beaches, warm sun and the draw of the growing downtown, Delray became a favorite for veterans through the 1960’s.

Atlantic Avenue became Florida’s largest retailer of surfboards in the 60’s. As the village by the sea continued to grow and prosper, many came here to enjoy the almost year round surfing, something that couldn’t be enjoyed many other places stateside. With I-95 nearing completing, the pipeline of tourists and trade laid a foundation for growth who’s momentum carried it into the 80’s.

As the original homesteads began to fall into disrepair, and the old neighborhoods continuing to decline, rebuilding and preserving historic landmarks became a passion for many Delray Beach residents. Among those, was the Colony Hotel. Because of these preservation efforts, Delray has become an cultural icon, with landmarks registered throughout the US Registry of Historic Places.

Delray Beach Florida continues to be a thriving community, full of innovative businesses and corporations who, like Green Arrow Marketing, call it home.  We’re proud to be headquartered in Delray Beach, even though we get the opportunity to work with clients from all over. And because our core services include SEO, Social Media Management, Social Media Advertising, Google AdWords, graphic design, print and more…we can work with clients both locally & over long distances. Our team of professionals as years of experience working with and managing projects for a wide variety of clients, spanning a wide variety of businesses and industries.

If you’re a Delray Beach businesses, and you’d like more clients, trust the pros who call Delray Beach home. We know the area, as well as the unique challenges facing South Florida business owners. We focus on real results, like getting your phone ringing, getting email inquiries and pricing requests from real customers. Real leads that you can use to help sustain long term growth for your business.

Give us a call today, we’d love to learn about your business and how we can best help you take it to the next level. We can be reached at 561-450-9288 or you can Contact Us here.

We look forward to working with you!